Am I not Dog enough?

That’s it. This perfectly describe my emotion.

I have always heard that ‘MEN are DOG’. At first, I thought what you can hear in almost any comedy movie having this statement, that is, dogs are faithful but men are not. Ya I know, too old a joke now. May be we should have been compared with rabid dog or something. Then it would have made much sense. Anyways, that, I meant was my original thought.

Then I thought of giving it a rerun. After all this thought has been for years whereas I am just 20. I believe in giving respect to a hypothesis if its older than me. Anything younger than me is just a rumour.

Then I realised what the sentence meant. Draco gets food whenever he wants. He goes out twice or thrice daily and run around wild with tongue hanging on one side. He also has two, maybe three girlfriends who peacefully co-exist.

When Draco comes back from his expeditions he drinks ample amount of water that is RO processed or whatever the latest technology that is. Then he goes to the balcony, reviews the condition of his empire, looks at the other stray dogs as an emperor might look at his subjects. After this formality he takes his legen… wait for it.. dary nap. It is as if he has taken a sleeping pill or something.

He recently met with a life-threatening accident and thankfully came out without much harm. Since then he has been eating from my mum’s hand directly. Seeing this a quick flashback came to me of all the times when he has been either sick or just not feeling it. He then eats from someone’s hand (usually my mum’s) only.

Besides, he travels by car only, sleep in A.C. rooms in summer and prefers lift anytime over stairs.

This gave me the reason why it is said that men are dogs. It is so because they like to live as they wish . Believe the world is beneath them, have reckless relationships and like cars and laziness.

I know there always is a but..

But I am not as happy as that son of a bitch (literally). And neither am having girlfriend(s), RO water or ACs. What I have is a small room with two room-mates with just fans, water from who knows what and yes, i am single. And also, yet, I am not as fit as Draco. Worse than all of them combine, I do not even have a car here.

The only question I can ask is- “Am I not Dog enough?” 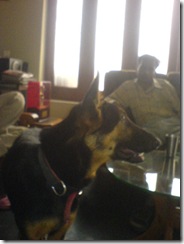 good observation but defiantly you are not dog enough.